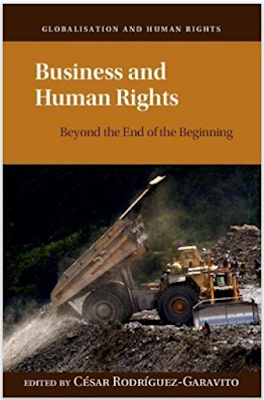 I am delighted to announce the publication of Business and Human Rights: Beyond the End of the Beginning (César Rodríguez-Garavito, ed., Cambridge University Press, 2017). The book includes a collection of important essays on the scope and direction of the project of the institutionalization of business and human rights, and the context in which that is possible. This description from the back matter:

The regulation of business in the global economy poses one of the main challenges for governance, as illustrated by the dynamic scholarly and policy debates about the UN Guiding Principles on Business and Human Rights and a possible international treaty on the matter. This book takes on the conceptual and legal underpinnings of global governance approaches to business and human rights, with an emphasis on the Guiding Principles (GPs) and attention to the current treaty process. Analyses of the GPs have tended to focus on their static dimension, such as the standards they include, rather than on their capacity to change, to push the development of new norms, and practices that might go beyond the initial content of the GPs and improve corporate compliance with human rights. This book engages both the static and dynamic dimensions of the GPs, and considers the issue through the eyes of scholars and practitioners from different parts of the world.

The Table of Contents and portions of the Introduction follow.

5 - From Guiding Principles to Interpretive Organizations: Developing a Framework for Applying the UNGPs to Disputes That Institutionalizes the Advocacy Role of Civil Society pp 76-96
By Larry Catá Backer
https://doi.org/10.1017/9781316797990.006