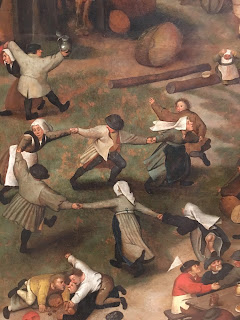 
The effects of the Affair of the Sonic Weapons Attack continue ot become clearer. The cumulative effect of the measures taken by the United States, which is driving the change in the tone and direction of normalization, is to reduce forward movement in the growth of economic and commercial activities between the two countries. Ironically enough, though less so in this context, ideology on both sides continues to be bad for business. The Affair of the Sonic Weapons Attack appears to have provided just the cover necessary to appear to move forward in normalization while moving its actual realization back to a time even before the Presidency of George Bush at the start of this century. It is likely that confirmation of this de facto change in U.S. policy might be revealed when the final revised regulations are released that are meant to implement the changes announced earlier this year by the U.S. President (here, here, here, and here). But the result has become clear--except for large businesses with long term plans that are willing to wait this out, in the short and medium term the cost of doing business in Cuba, already high given barriers to trade in Cuba and in the United States, will only get higher. Sarah Marsh, reporting for Reuters, "U.S. expulsion of Cuban diplomats includes all business officers" follows below.
Clearly there is frustration on the U.S. side, and likely some on the Cuban side as well.  Even more clear, however, is the lack of clarity about the Sonic Weapons Attack U.S. or Cuban efforts to determine their cause, or the efforts by either to strengthen cooperation to seek answers. Indeed beyond speculation by others the relative silence of both sides might tempt one to think about hidden agendas.  Perhaps that is to be expected in relations between two states that do not trust each other at all, and where powerful factions in both states are maybe desperate to bring back the status quo ante normalization.  That would be pity. On the U.S. side these determinations ought to be made with a bit ore by way of vigorous public debate, which used to be our ideological working style. On the Cuban side, playing chicken with the United States never ends well, exposes weaknesses in Cuban authority at a very delicate time and courts instability where the net negative effects compounds the disasters of the recent storms. In the end it might be necessary to pull the plug on normalization.  On the basis of the information available now that is unlikely and one might be more inclined to suspicion (on the bad behavior and miscalculations of of both sides (here)). 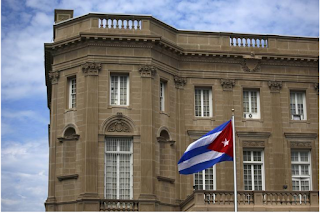 HAVANA (Reuters) - The Cuban diplomats expelled from the United States this week included all those dealing with U.S. businesses, Cuba’s embassy in Washington told Reuters on Thursday, dealing another blow to bilateral commercial ties.

“Due to this decision, the activities developed by the Economic and Trade Office of the Embassy of Cuba to the United States ... will be seriously affected,” one Cuban diplomat said in a farewell message to a U.S. group that takes investors to the Caribbean’s largest island.

The Cuban embassy is often the first step in the process for U.S. companies to explore opportunities and make a pitch. Officials help them submit a trip proposal, seek out counterparts at state-owned enterprises in the centralized economy, and receive a business visa to travel to Havana.

Whether the embassy will still be issuing such visas remains unclear, given one diplomat will remain in the consular section.

On the American side, the downgrade of the U.S. embassy - Washington last Friday ordered the departure of all non-emergency staff - will likely make it harder for U.S. companies to find their way in Cuba.

“It’s the chilling effect of a diplomatic crisis,” said Pedro Freyre, a Cuban-born attorney who heads the international practice at law firm Akerman.

Some U.S. companies may choose to stay on the sidelines until relations improve, he said, adding that his clients already pursuing opportunities in Cuba were staying the course as they saw it as a long-term play.

U.S. companies flocked to Cuba in the wake of the detente former Democratic President Barack Obama agreed in 2014.

The original frenzy in U.S. commercial interest in Cuba was tempered by the realization that doing business in cash-strapped Cuba was difficult and even harder with a trade embargo in place.

Businesses now face a hostile stance from Republican U.S. President Donald Trump, who in June ordered tighter restrictions on travel and trade that have yet to be unveiled. Last Friday, his administration issued a warning on travel to the island.