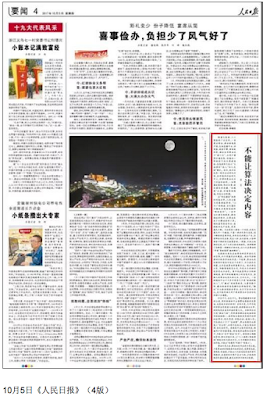 In the run up to the 19th Chinese Communist Party Congress one expects a certain quickening of the pace of political discussion as decisions become necessary around sometimes contentious choices for moving the nation forward. While most of these discussions occurs within the CCP itself, some sometimes leak out to the public--in what might be assumed to be carefully measured disclosures in state sanctioned media.

More specifically what appears to be an unusual opinion essay found its way onto the pages of China's People's Daily. That essay 《不能让算法决定内容》"Do Not Rely on Algorithm to Decide" suggests that there are some qualms about the scope and application of the "big data management" initiatives and its related social credit architecture that appears to be the vanguard forces of a transformation of the governing apparatus of state and party. The qualms come form both the Chinese left and right. In both cases the qualms potentially reveal the weaknesses of current approaches to analysis and critique of emerging governance structures represented by big data management initiatives and their social credit programs.

Flora Sapio and I have written short reflections on this article. The article raises fundamental issues of law, governance and culture at time of great transformation of the modalities through which these great institutions of human societal organization are undergoing change.

My Reflections may be accessed HERE.

This post also includes the text of the article 《不能让算法决定内容》"Do Not Rely on Algorithm to Decide" (只有中国语文). ENGLISH TRANSLATION at China Social Credit System Blog, with thanks to Flora Sapio: HERE.