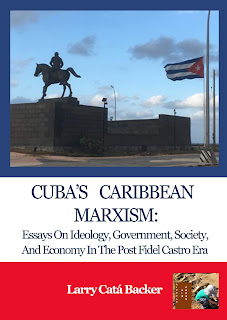 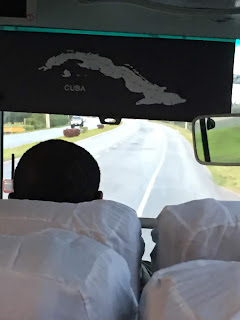 
I promised that over the course of future posts I would be introducing readers to the book. This post continues with the book introduction, which follows below. Here for access to other posts in this series.  HERE for the video recording of the launch event for Cuba's Caribbean Marxism: Essays on Ideology, Government, Society, and Economy in the Post Fidel Castro Era, which took place 12 November 2018 at Penn State.

Introduction
This book is about ideology.  Ideology is the conceptual foundation for the individual and societal self-constitution. Ideology is the “fiat lux” (Genesis 1:3) of human organization, of self-awareness translatable into the organization of self and the self’s relations with others, and the development of systems for their orderly operation. It is the constitution of the basic taboos and compulsions that produce self-awareness and the referents from which the world can be known--and ordered. Ideology is the way in which objects are signified, and the way these can be made to point to truth or to lie.
The theory and practice of ideology is usually of relevance in the margins of the study of law, politics, economics and the like.  It is sometimes understood as “after the fact” posturing or rationalization of little intrinsic value except perhaps to students of propaganda.  It is sometimes assumed that ‘nobody believes it;’ ideology is also said to be used and consumed but never embedded in the way people or institutions think or operate. This book will suggest that ideology quite consciously delimits but also makes possible the development of the principles through which individuals and communities can understand the world around.  That fundamental understanding, made possible within the basic premises for ordering the world that constitutes ideology, is the essential understanding the sufficiency of which makes possible the ordering of social, political and economic lives and institutions, from and around these basic building block premises.
This book is also more particularly about Cuba. Cuba serves as an ongoing living experiment in the possibilities of molding individuals and the society along the lines suggested by application of a quite explicit set of grounding principles. Is it possible to view the world solely from a very specific set of premises--in this case derived from European Marxist-Leninism and forged in the context of the socio-political effort of a small state to protect an autonomy from a powerful neighbor expressed as fundamental differences in social, economic, political and cultural organization? In the striving for that answer lies sometimes profound insights into the way that the interaction of ideology and social organization produces quite specific and sometimes predictable approaches to organization and protection of belief systems and their expression through self-disciplining institutions--even in the face of sometimes overwhelming external threat (or the blandishments of substantial material riches). Since 1959, the Cuban experiment with its own increasingly unique brand of Marxism-Leninism has been undertaken with extraordinary transparency. Like other important ideology producing states--the United States, China, and the European Union, Cuba has made it easy to examine the arc of inter-relationship between the development of ideology and the efforts, only sometimes successful, to embed that ideology in the operations of the institutions of Cuban politics, economics, culture, and international relations.
The essays that comprise the twelve chapters of this book are drawn from a decade and more of thinking about Cuban ideology and its application in the wake of the passing of Fidel Castro, the charismatic founder of what these essays identify as Caribbean Marxism. Many of the chapters were first presented at a number of annual conferences of the Association for the Study of the Cuban Economy,  a non-profit, non-political organization incorporated in the state of Maryland in 1990 affiliated with the American Economic Association and the Allied Social Sciences Association of the United States. Together, these essays consider the arc of Cuban development during a crucial period from the effective assumption of power by Raúl Castro to the beginnings of efforts to prepare for the conclusion of the period of Cuban history dominated by the generation that brought to success the 1959 Revolution that ushered in the current socio-political system.
The book is divided into twelve chapters, including this one. They are informally divided into two parts. The first seven chapters develop the conceptual framework for understanding Caribbean Marxism as a theory and the challenges that theory poses in the face of reform necessitated by changes in historical condition.  Chapters 2 and 3 develop the baselines of Caribbean Marxism as to its normative principles (Chapter 2) and its organizational structures (Chapter 3). Chapter 4 then considers the role and principles of reform within those structures. Chapters 5 and 6 consider the way that reform has altered basic theoretical premises (Chapter 5), and the principles through which economic activity is conceptualized and organized (Chapter 6). Lastly, Chapter 7 takes Caribbean Marxism outward by examining the way it sees itself in the world and in shaping global discourse in the context of sovereign finance and its political ramifications.
The book shifts focus in Chapters 8 through 12. Where Chapters 1 though 7 examine Caribbean Marxism in more abstract terms, Chapters 8 through 12 focus on the concrete manifestation of these abstract structures in several key areas--economic organization of the private sector, trade and investment, and lastly the project of constitutional reform.  Chapters 8 and 9 consider the labor cooperative as a specific example of the way that ideology shapes reform, and constrains implementation.  Chapters 10 and 11 turn to the outward expression of Caribbean Marxism.  If Chapter 10 considers the projection of Caribbean Marxism outward, Chapter 11 considers the projection inward of global standards to Cuban economic activity. Chapter 12 ends this collection of essays by return to where they started--in an examination of the way that ideology shapes the core organization of the administrative state itself. Its focus specifically is the 2018 Cuban Constitutional reform initiative, through which ideology is incarnated in the organs of state.