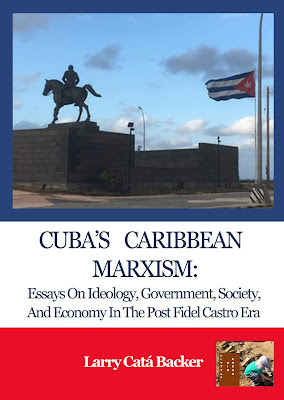 I reported the publication of Cuba’s Caribbean Marxism: Essays on Ideology, Government, Society, and Economy in the Post Fidel Castro Era (Little Sir Press 2018; ISBN: 978-1-949943-00-9 (pbk); I SBN: 978-1-949943-01-6 (ebk)) (here).  Cuba’s Caribbean Marxism is the first offering through Little Sir Press, a self-publishing collective that is a new project in broader knowledge dissemination of the Coalition for Peace & Ethics (more about that project here). Join us!


I promised that over the course of future posts I would be introducing  readers to the book. This post starts that introduction with Flora Sapio's Foreword to the book, which follows below. Here for access to other posts in this series.  HERE for the video recording of the launch event for Cuba's Caribbean Marxism: Essays on Ideology, Government, Society, and Economy in the Post Fidel Castro Era, which took place 12 November 2018 at Penn State

(Caminante, no Hay Camino, 1912 Antonio Machado) [Wanderer, your footsteps are the road, and nothing else; Wayfarer, there is no route: one makes a path by going.]


The general consensus about Cuba suggests how the Caribbean Island is a secondary actor in the skirmishes of global politics. Cuba is not endowed with those features that can make a state internationally powerful, in a traditional or in a modern sense. Cuba doesn’t have a large territory, a numerous population, or a strong army. Neither it is a hub of global supply chains, finance, physical or digital infrastructure.

Yet Cuba constantly rises to the limelight of global interest. This simple fact suggests that there might be a differential between the weight that is attributed to Cuba, and the objective value of Cuba in globalization. The mere possibility of such a discrepancy ought to immediately induce an attempt to understand Cuba for what it is, rather than for how it is represented. An attempt to understand why and how the Island continues to play a role well above what one would expect has to start by discarding the uses to which Cuba is put in domestic policy, and focusing on the Island’s ideological structures. Specific dynamics in the economy, government and society of Cuba may be of interest in their own respect, yet only knowledge of Cuban ideology allows to understand post-Castro reforms in a way that benefits the observer.

Cuba’s Caribbean Marxism is a book about the broader ideology behind a decade of reforms in Cuba’s domestic governance. Those who decide to undertake the long journey through the twelve chapters of this book will get a privileged insight into how the seemingly arcane words of ideology manifest in Cuba’s government, economics, society, and in Cuba’s role in globalization. At the end of this journey, they will be one step closer to understanding Cuba on its own terms.

Writing that failure to understand Cuba will result in the loss of significant opportunities – for states, enterprises and individuals – might seem closer to an empty sales pitch than to an intellectual reflection.

But, to paraphrase Backer, the different meaning we attribute to any of the objects we observe can point us either to Truth or to Lie. Backer illustrates this difficult point in his discussion of Cuba’s constitutional reform. He uses a material artifact – a Nkisi – as an example of how imposing our own ideas on any object can drive us away from Truth, as Truth is proved by facts. A Nkisi is just a wooden sculpture – and objects cannot speak to inform us of what they are. So a Nkisi, or any other object, can be only understood through the meaning we give to it.

By contrast, governance systems can and do speak. They speak through their ideology, the documents outlining the goals of that ideology, and the reforms enacted in the attempt to translate ideology into tangible facts. By speaking about themselves, governance systems inform us of what they are. Yet the words used to speak ideology are not always listened to, and much less understood for what they mean. Uninspiring and dull, they have the two opposite effects of distancing the listener, or inducing her to repeat those words for the sake of ease.

In either of these cases, one would miss the very governance system one purports to understand, and reveal much more about one’s own interest, and perception of the world, than about Cuba as it is.

The choice to take a distance from the tediousness of ‘ideology-speak’ by subjecting this form of speech to mockery or ridicule would relegate Cuba within the province of now dismantled Marxist-Leninist systems. A valuable lesson one learns from reading Cuba’s Caribbean Marxism is that Cuba may have no interest in ‘converting’ observers to the allegedly higher truth of its own breed of Marxism. All forms of discretionary power thrive on information asymmetries. The most severe information failures occur when statements meaningful to those who make them are ignored, quickly dismissed as unimportant by the listener, or understood to mean what the observer wants to hear. It is then than discretionary power enjoys the real possibility to distribute benefits and costs as it sees fit.

At times, the choice to degrade ideology might be premised on a will to validate a certain set of pre-existing beliefs and scenarios. One of the scenarios most readily accepted by the public, and hence worth projecting, is the one under which Cuba will eventually transform into a system paying lip service (at least) to the principles of ‘exogenous democracy’. The projection of this and similar scenarios can benefit their proponents regardless of what will ‘happen on the ground’ in Cuba. In the absence of Cuba’s democratization, further analyses may be required to understand why no one of the projected scenarios materialized. Should a political transformation occur, further analyses may be required to design and implement methodologies to measure and evaluate the performance of Cuba and its elites.

The decision to repeat the words of Cuban ideology, rather than dismiss them, can ironically be premised on a similar will, and yield similar outcomes. Thirty years ago, the existence of studies in ‘comparative Communism’ was sufficient to avoid conflating Cuba with any idealized version of ‘global’ Marxism-Leninism. Obscure as they may have been, analyses of ‘comparative Communism’ had the merits to prove how different types of Marxist-Leninism existed in each one of the countries of the former Soviet Bloc. A body of knowledge existed, to enable differentiated attitudes and responses to different systems, rather than the lumping all Marxist-Leninist systems under the same label.

This body of knowledge now seems to be largely ignored. For someone with an academic background in the study of China, Vietnam, or North Korea, no temptation is more enticing than considering Cuba as a Caribbean late-comer to Asian Marxism-Leninism. How easy, and how deceitfully rewarding would such an intellectual move be.

From an epistemic point of view, very little or no effort would be required to earn any knowledge about the specific ideology that has shaped Cuba, its state, its economy, and its society. To make sense of what from the outside looks as a very familiar-yet-different cauldron of races, mechanisms, ideas, words and institutions, the observer would not need to walk outside the door of her cognitive structures. Any of the tropes normally employed in analyses of China, Vietnam or even North Korea may be conveniently recycled in the study of things Cuban.

So as outside advocates of a democratic transition would eagerly slap any of the available labels on the Island, comparatists may choose to frame Cuba either as “China’s little sister,” “a New Vietnam,” or even the “North Korea of the Caribbean.” The inclusion of Cuba within categories constructed by the observer would, of course, not guarantee that Cuba would conform to the reform path of any Asian governance system. Those interested in knowing how and why Cuba will undergo a different path of transition will find the answer in Cuba’s Caribbean Marxism. Its twelve chapters should not be read as the history of ten years of attempts to catch-up with economically more prosperous Marxist-Leninist regimes, but as the history of efforts to forge a new path there where no road exists. Therefore, readers should not automatically assume that a ‘first-level cooperative’ existing in Cuba today can be analogized to the ‘first-level cooperatives’ established in China in the 1950s. The names of these and other public entities analyzed in the book may be familiar to academics with a background in China studies. Yet, Cuba’s decision to create these entities is a prelude to a different reform path.

Caribbean Marxism is Marxism as developed by leaders of the Cuban revolution, and by those who have inherited the difficult task of governance reforms. It is an adaptation of the classical tenets of European Marxism to the concrete circumstances of Cuba. A feature common to the constitutions of most Communist Parties – both existing and defunct - is a Preamble where the ruling Communist Party states what it is, and describes how its founders adapted classical European ‘dogma’ to their local context, when they experienced that the European recipe for Revolution did not work in the Caribbean or in Asia.

Each and every distortion in how we observe an object is eventually produced by how we choose to position ourselves in relation to that object. Such an effect does not merely involve institutional observers, or academics specialized in the study of Marxist-Leninist systems as China, Vietnam, and North-Korea.

Cuba’s Caribbean Marxism subtly points out how the vulnerability of Cuba’s reform process lies more on the reliance of certain tropes, than in any real lack of capability by its officials and its people in forging a path for themselves. Nothing is easier than capturing Cuba – or any other country – within any of the existing discursive tropes. When this operation is performed from outside the Cuban border, it has negligible or no effects on domestic processes. Another precious insight one obtains from the book is that Cuba filters, selects and compartmentalizes all that it comes in touch with through a complex set of cognitive, cultural and institutional mechanisms that reducing to an ‘insider/outsider’ distinction would be simplistic.

At the same time, no tropes are more harmful than the tropes one creates for oneself.

Cuba’s Caribbean Marxism comments on what Backer calls “the embargo mentality.” I have very little to add to his discussion of the effects the “embargo mentality”. What is rather striking is observing scenes similar to those one might witness in Havana, and hearing a similar range of opinions there where one would expect sacrifice to be paid off by all of the material rewards markets should deliver to their followers.

In truth, pure markets of the kind of those theorized by Adam Smith do not exist. They are an aspirational ideal not dissimilar from the abolition of social classes. While the abolition of social classes calls for the intervention of a vanguard, the realization of a perfect market calls for a varying degree of involvement by the state. Just as Caribbean Marxism is the adaptation of a specific political philosophy to Cuba, variants of the Market existing in the most diverse countries inevitably entail the intervention (to different degrees, in different forms, and through different means) of ruling parties, through the support of their national governments.