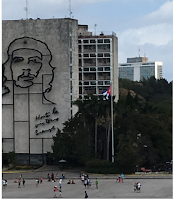 
I promised that over the course of future posts I would be introducing readers to the book. This post continues with an introduction to Chapter 3 ("Cuban Leninism as Praetorian Marxism"),  which follows below.  Here for access to other posts in this series.  HERE for the video recording of the launch event for Cuba's Caribbean Marxism: Essays on Ideology, Government, Society, and Economy in the Post Fidel Castro Era, which took place 12 November 2018 at Penn State

Cuba is both a special case, and emblematic of the challenges and opportunities facing states similarly situated. Cuba is a Marxist-Leninist Party-State, but not one at the forefront of important streams of development of Marxist-Leninist theory--at least as practiced by states. Fidelismo (Castro Ruz 1999) remains a critically influential theoretical development of Marxism and Leninism among intellectuals, yet reflected in state practice beyond Cuba’s borders, if reflected at all, only in diluted form among regional neighbors. Yet the case of Cuba is also special if only for the trajectories of its relationships with the United States, and especially the U.S. embargo that has played a central role in that relationship; and for Cuba’s internationalism--both diplomatic and military--that allowed Cuba to punch well above its weight (Connell-Smith 1979). Thus, efforts to embed analysis of the special case of Cuba within the mainstream of discussion of law, economics, politics, and culture have been important (Dominguez 1990).

Equally important have been adherents of the long-cultivated notion that the Cuban situation was sui generis, a porridge composed of equal parts colonialism, cultural hegemony, geography, race and religion, cooked in a pot created by the Cold War of the last century and stirred by the fairly large ladle that is the product of an ideology of developing states. Yet it might be suggested that this sui generis approach may be more a product of the romanticism of Europe and North America than of any reality, combining large dollops of Caribbean exoticism, Gnosticism in political conflicts, and the exportation of ideological battles between the European and North American left and right. Yet these eddies have tended to be centered in analysis over the last few decades (e.g., Bye 2012; Backer 2018). That tells the reader much about the way in which states on the periphery may be understood by those elites who constitute “the center.” But it tells us less about the periphery itself than might be gleaned by putting those conceptual lenses aside, if only briefly and partially (Dominguez 1978). Perhaps considering the Marxist-Leninist periphery might better inform the character of Marxism that took root in the Caribbean. This chapter examines emergence of Caribbean Marxism in the shadow of the establishment of the Marxism-Leninism of another peripheral state--North Korea. Starting with Jung-chul Lee’s excellent paper, “A Lesson from Cuba’s Party-Military Relations and a Tale of ‘Two Fronts Line’ in North Korea” (2015), this chapter will suggest that the variant Leninism of both Cuba and North Korea substantially shapes both its institutional forms and ultimately the normative foundations of its Marxism.