Ruminations 86: An Elegy on the 75th Anniversary of the Allied Invasion of Normandy 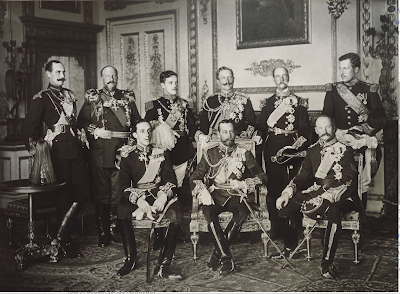 How does one mark the passing of an age? To mark is to acknowledge; it affirms  a difference that might be incomprehensible but for the way in which the signs that mark the collective self reflection of a society are understood. To pass is to suggest a transition or movement from one state of things to another that can be recognized by reference to some set of collective judgements grounded in collective premises about the meaning of events and conditions.  An age suggests a period of time joined together by a collective consensus about the meaning of things and the ordering of relations; an age is the expression of the way on which a self reflexive community sees itself and the world around it, and how it sets itself apart from and in relation to tat world.

But to mark the passing of a age requires that those marking that passage stand outside that age. That "apartness" might itself be marked  by the passage of time, or a change to the place from which such judgment can be made. On this 75th Anniversary of the start of the Allied invasion of Europe to defeat the Axis Powers (and ultimately to bring about the birth of a new age, it is worth thinking, if only for a moment about the passing of time--and in this case about the passing of an age that is itself marked by the celebrations designed to affirm the birth of that age.  This post , then, is an elegy for the celebrations of the coming of the new age of globalization that itself now marks the passga eof the age the birth of which it is meant to celebrate.


The birth of an age can me marked by a celebration of the vitality of a passing age--here the marker is recognized for what it is only well after the fact.  The funeral celebrations of Edward VII in 1910 is a well known  event--the last gathering of the royal huses of a Europe on the brink of violent transformation.   Another was the 2,500th year of Foundation of Imperial State of Iran (Persian: دوهزار و پانصدمین سال بنیانگذاری شاهنشاهی ایران‎), consisted of an elaborate set of festivities that took place on 12–16 October 1971--another gathering of notables of a world that would soon recede into memory. 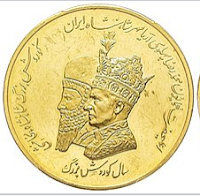 An age can be pushed aside with the birth of another. Sometimes that birth is only recognized long after the event.  But sometimes it is announced with all of the fanfare that the apparatus of a society can muster.  That was certainly the case with the arrival of China's "New Era" the birth of which was attended by all of the pageantry of the 19th Chinese Communist Party Congress.

But as often, Death tends to mark the spot. Death here is to be understood in its most immediate sense--in the extinction of human life.  But not just any life--but a specific life or lives attached to an event or series of events that then serve as the incarnation of the passing of the life of a societal order. The beheading of monarchs served such a purpose from time to time in Europe, as did sometimes an otherwise ordinary death in bed. More often the death of many in the context of an organized act of violence could serve as such a marker.  Bloody Sunday (January 1905) in Russia is one well known event and famous battles are sometimes taken for such markers. Among the most famous in recent memory was the 6 June 1944 invasion by the Allied Powers of Normandy France then held by the forces of Germany.

Ceremonies sometimes serve as markers of such events--as the place where a public recognition of such a passing can be acknowledged and the space between what is past and what is present may be affirmed among those with the power to effect such affirmations on behalf of the rest of us.  Such an event was recently celebrated when many of the representatives of those who were principally involved took part in the celebration of the 75th anniversary of that event--and more importantly of the eventual defeat of the Axis powers that then brought forth the contemporary world order. 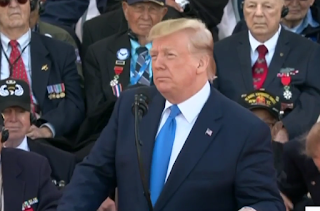 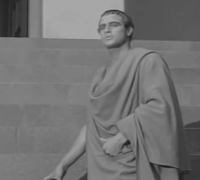 But the ceremony itself can acquire an ironic meaning--becoming more meaningful for what it points to rather than what it points at. In those cases, ceremonies that were meant to convey important symbolic or catalyzing moments in, and affirmation of, a current age may actually serve to mark the passing of that age. That dissonance may be marked as much by the age of the celebrants, whose passing also signals the passing of the age they created, as by the context in which the celebrations no long appear to have much contemporary (as opposed to historical) reference. Equally likely is that the key celebrants might themselves mark the event not so much as a celebration but as an elegy for an age just passed; they "come to bury Caesar, not to praise him" (Shakespeare, Julius Caesar, Act III, scene II.


And thus we have the spectacle of the celebration of the dawn of the new world order, honoring the people who gave their lives so that their leaders might bury the old age and begin the development of the new era. Those individuals are quickly becoming historical figures and it is right to honor them for their part on bringing to life the new era. And yet that celebration was hosted to at least one of the individuals who since at least 2016 have incarnated the destruction of the very age whose birth they celebrated in Normandy.  The celebration of the new era was transformed by that presence and those actions from a ritual of life to an eulogy of a passing age. That this eulogy was performed as a funeral rite in the presence of the remaining individuals who incarnated that birth and who soon would also join their comrades in eternity added power to the performance that was the celebrations at Normandy. Those leaders came to Normandy not to praise the old era but to bury it. 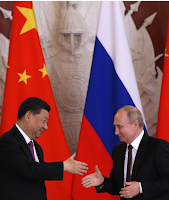 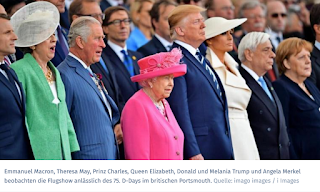 And even as this dual meaning ritual was being undertaken in Normandy, two of the other architects of the new era were meeting in Moscow--not to commemorate the genesis of the post 1945 era, but to bury it as well within the ritual language of the  Development of the People's Republic of China and the Russian Federation Joint Statement of the New Era Comprehensive Strategic Collaboration Partnership [中华人民共和国和俄罗斯联邦关于发展 新时代全面战略协作伙伴关系的联合声明] (discussed here). From the ashes of the old age, the new era of empire, of a Belt and Road Initiative and of its corresponding America First Project now arises.