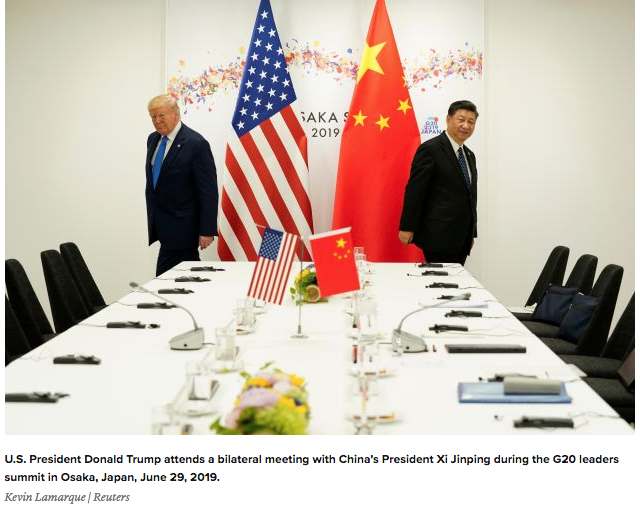 
It was with some relief that the political and economic classes greeted the tentative but from their perceptive positive forward movement between China and the United States after their respective Presidents met at the G-20 Meeting in Japan. "Mr Trump also said he would allow US companies to continue to sell to the Chinese tech giant Huawei, in a move seen as a significant concession. Mr Trump had threatened additional trade sanctions on China. However, after the meeting on the sidelines of the main G20 summit in Osaka, he confirmed that the US would not be adding tariffs on $300bn (£236bn) worth of Chinese imports." (G20 summit: Trump and Xi agree to restart US-China trade talks). This appears to have had an effect on global financial markets (at least in the short term) (Dow Futures Higher as Trump/Xi Meeting Dominates G20 Focus, Keep Markets on Edge).  It was noted, however, that Presidents Trump and Xi had reached a similar agreement last year at the Argentina G20 meeting (‘It’s a temporary timeout’).

The Coalition for Peace & Ethics Working Group on Empire issued the following statement in the wake of that news:

Both Presidents Xi and Trump bear a heavy responsibility for ensuring that they each protect the highest principles and aspirations of their respective countries and that they each promote those core values that all peoples share. The process of realizing these objectives has been made more difficult by the uncertainties that arise at the start of this new era of historical development. For both countries, this new era presents new contradictions unique to each that must be understood as central to their respective continued development. Each requires greater attention to the obligation to emancipate the mind in the face of the respective historical realities of China and of the United States if they are to be overcome. That process can be painful. But under the core leadership of Presidents Xi and Trump, it now appears clearer that the collective leadership of both states will be able to work successfully toward a resolution that respects the core principles of their respective collective economic systems and is also sensitive to the respective dignities of their peoples. In the process, under their collective leadership and guidance, they will together contribute, each in their own way, to a more stable and equitable world order more suitable to the present times.