In July 2020, MSIntegrity Released its Report: Not Fit for Purpose: The Grand Experiment of Multi-Stakeholder Initiatives in Corporate Accountability, Human Rights and Good Governance. It described the thrust of the Report on its website:

Not Fit-For-Purpose reflects on a decade of research and analysis into international standard-setting MSIs. It concludes that this grand experiment has failed in its goal of providing effective protection against abuse. While MSIs can play important roles in building trust and generating dialogue, they are not fit-for-purpose to reliably detect abuses, hold corporations to account for harm, or provide access to remedy. Through an analysis of six key cross-cutting insights, the report invites readers to think critically about the limitations of voluntary regulation and to envision more effective strategies to protect human rights.

The Report is worth considering in two respects.  First on the specific critique of the forms and operation of Multi-Stakeholder Initiatives.  Much of its observations bear careful consideration.  Second, and perhaps more profoundly, is the development of the insight that the logic of institutions, even those created for the best reasons and most positive (normative) intentions inevitably become the prisoners of the logic of institutional forms. It then follows that the stronger the institutional form, the more precarious its relationship to the passion and normative thrust that brought it initially to life. 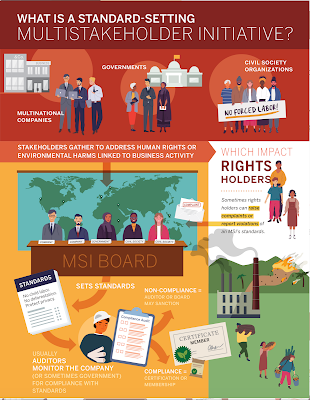 Summary materials from the Report (the Six Key Insights) along with information about MSInsight follow. 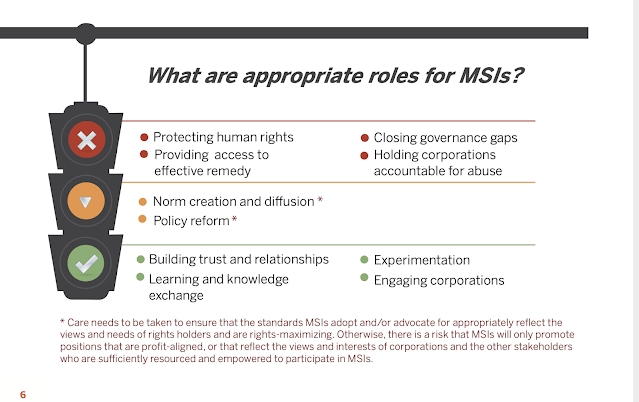 From MSIntegrity Not Fit For Purpose Summary Report available HERE.

The Institute for Multi-Stakeholder Initiative Integrity (MSI Integrity) aims to reduce the harms and human rights abuses caused or exacerbated by the private sector. For the past decade, MSI Integrity has investigated whether, when and how multi-stakeholder initiatives protect and promote human rights. The culmination of this research is available in this report: Not Fit-for-Purpose.

We are now embarking on a new direction: applying lessons learned from the grand experiment in multi-stakeholderism to promote business models that center worker and communities in their governance and ownership.

See our new work: Beyond Corporations.