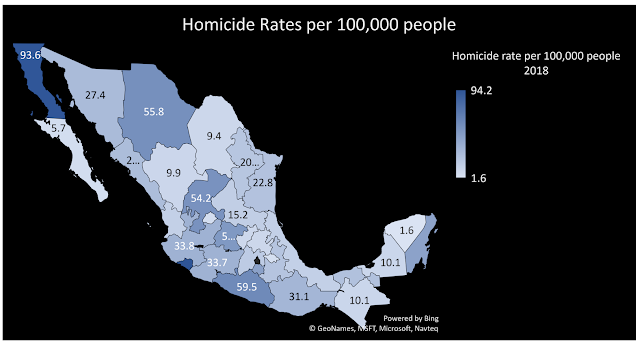 I am delighted to announce the posting of the Coalition for Peace & Ethics latest Working Paper: James Korman, "Drug Cartels, Oil Rents, and Homicide – The Case of Mexico" CPE Working Paper 9/1 (1 September 2020). 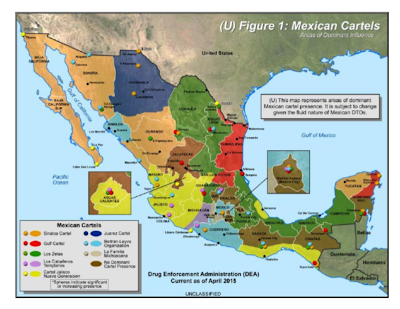 In this paper James Korman seeks to provide a more nuanced explanation for the phenomenon of murder as a critical tool in the organization and functioning of the cartels, which in Mexico at times  and places assumes something like an extra governmental center of control and regulation.  That extra-legality (vis a vis the duly constituted government of Mexico and its subordinate units expresses itself through governance norms that are both a challenge to the authority of the formally constituted state and at the same time seeks to naturalize a set of operating and normative principles that are  incompatible with the moral and functional basis of the formal state. More interesting, though, and in a way that could be generalized to other regions (e.g., Libya) where the formal structures of state may be threatened by the reality of robust extra legal institutions, is the connection between activity, forms of control (murder or violence) and the presence of valuable natural resources. A tantalizing hypothesis that Korman finds unconvincing.

This is nicely expressed in the paper abstract:

This empirical study examines drug trafficking violence in Mexico and seeks to explain the exceedingly high homicide rates within the country. It utilizes a cross-sectional statistical model in order to accomplish this. It examines all 32 states within Mexico and is set out to undercover whether or not the presence of oil/gas fields & pipeline impacts the intensity of violence through cartel rent extraction as cartels might compete for oil rents therefore escalating the violence and homicide levels present throughout Mexican society. It provides a reconstruction of events that led up to the Mexican drug war and examines what the literature is saying on key determinants of violence and homicide in Mexico & Latin America at large. It provides a present context for the 2010 decade on the state of the cartels in Mexico and who the prime actors are. The empirical findings show that oil rents/pipeline due not contribute to a higher level of homicide nor does the interaction term between Los Zetas and oil pipeline/gas& oil fields experienced in the various 32 states within Mexico for which both variables are present. Finally, the study concludes with a discussion on the implications of the empirical findings and possible areas of research that remain unaccounted for that could help explain the exceedingly high homicide levels in Mexico in the presence of drug trafficking.


The paper may be accessed on the Coalition for Peace & Ethics Website (here) and on the Social Science Research Network (here). A later version of this paper will be published in Vol. 15(3) of the CPE Bulletin, Emancipating the Mind in the New Era (forthcoming November 2020).
Posted by Larry Catá Backer at 9/03/2020 11:00:00 AM