Open Call for Input from the UN Working Group for Business and Human Rights: Next Decade 10+ "Business and human rights – towards a decade of global implementation" 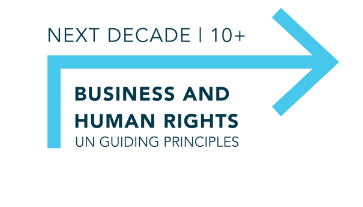 In the West, humans, and their institutions, are sometimes obsessed with the magical quality of the passage of time.  Time, of course, IS magical, in the sense that it signals first a thrusting toward vigor that then progresses toward an inevitable rigidity and a decline preceding death and its re-incarnation as memory. Every life, every effort, every endeavor, within the realities constructed through this obsession, is both marked by time, and doomed to a cycle of initial vigor and eventual decline, irrelevance, and oblivion (more more delicately put, toward ascent to a more eternal space of memory or joinder with a higher power).

Indeed, since in the West human life is sometimes understood to stand as the measure of all things, it is appropriate to gauge the passage of institutional time by the expected lifetime of the humans who are responsible for its formation. Though the lifespan of institutions (including states, enterprises, and other social structures) may exceed the span of a human life  many times over, it is the span of a human life that gives value to such long-lived expressions of the collective humanity from out of which it is spawned, nourished, and used. The same applies to ideas, and to principles on which human organizations are incarnated, and to all structures through which humans are trained to "see the world" they believe they make.

The rhythm of such measures, of course, are also creatures of the systems invented by humans to count such things.  Since the Enlightenment (and its more abrupt expression in the revolutionary transformations in France after 1789), the way that many humans count is based on systems of 10.  The English counted for a while based on systems of 12, and the Americans still do.  But there is an elegance (at least for those nourished on the principles of Enlightenment counting) to 10 that adds significance to measuring the passage of  times in blocks of 10, and in multiples of 10 (centuries, millennia, epochs, etc.).  That rhythm, then, also produces the temporal spaces within which it is possible to take the measure of a thing.

It is no surprise, then, that one has reached such a period of magical signification in the evolution of the life (vigor, decline, death, transfiguration into memory or progeny) of the United Nations Guiding Principles for Business and Human Rights. Aaaahh, but not exactly for the UNGP, rather signification attaches here not to the principles themselves but to a rhythm that is a function of the year in which the UNGP were endorsed by an authenticating body--the UN Human Rights Council. Not just that, of course, for the spawning also produced a living memory of the event--the Working Group for Business and Human Rights.

To mark that passage of time, and to enhance its signification certain rituals are necessary. Those are the means through which both the thing itself is celebrated, but also the means by which those who tend it assert their power over it (the role of a Nietzschean priesthood, e.g., here) and one can better prepare for the inevitable passage of the signification itself (young and expanding, middle aged and stable, old and in decline, preparing to make way for what comes next). The traditional ritual for such passages involve a collective celebration whose trajectories are well managed by those who have taken for themselves (or have been given) authority to care for  (in this case) the institution of the UNGP.

And so it is that the

UN Working Group on Business and Human Rights (UNWG) launched a new global project, ‘Business and human rights: towards a decade of global implementation.” Also known as “UNGPs 10+ / Next Decade BHR,” the project is centred around the upcoming tenth anniversary of the UN Guiding Principles on Business and Human Rights (UNGPs), the global authoritative framework on business and human rights that was unanimously endorsed by the UN Human Rights Council in June 2011. The project is taking stock of practice to date, identifying gaps and challenges, and developing a vision and roadmap for scaling up implementation of the UNGPs over the course of the next decade. (Working Group: Call for Input).

The Call for Input is thus an important marker for the measurement of the UNGP, and for its placement within its own life cycle.  One gets that sense, of course, from the way that the Call for Input is framed.  One might learn as much from the questions posed as from the answers to be harvested, and thus harvested, processed, packaged and refined for public consumption.  The guidance for inputs center on five key projects: (1) bettering UNGP implementation; (2) identifying (and avoiding) failures and the work left to be done; (3) identifying people and institutions (as well as narratives and ideas) that continue to stand in the way of preferred progress; (4) a barely concealed effort to reorient the UNGP from  centering economic activity in human rights to the of human rights as the language of (the currently best candidate for supplanting the UNGP) sustainability and climate change ; and (5) the evolution of data driven measures to which the enterprise might be reduced. From these, it is presumed, that the Working Group will seek to develop a 2nd Ten Year Plan for the UNGP. Let us hope it measures up.

The  Working Group: Call for Input (with links HERE) follows.  Please consider participating! Inputs will be received through  30 November 2020 through a conveniently provided form.  Brief summaries of materials the senders believe useful will be accepted through the end of February 2021.

Business and human rights – towards a decade of global implementation

On 7 July 2020, the UN Working Group on Business and Human Rights (UNWG) launched a new global project, ‘Business and human rights: towards a decade of global implementation.” Also known as “UNGPs 10+ / Next Decade BHR,” the project is centred around the upcoming tenth anniversary of the UN Guiding Principles on Business and Human Rights (UNGPs), the global authoritative framework on business and human rights that was unanimously endorsed by the UN Human Rights Council in June 2011. The project is taking stock of practice to date, identifying gaps and challenges, and developing a vision and roadmap for scaling up implementation of the UNGPs over the course of the next decade.

The project’s consultation process is being carried out in collaboration with OHCHR, UNDP, and others. The UNWG seeks to hear perspectives from a wide range of stakeholders from all regions, including government actors, international organizations, national human rights institutions, industry organizations, businesses, consumer associations, investors, trade unions, representatives of affected communities, indigenous peoples, human rights defenders, civil society organizations, professional associations and groups, academia, and others. Accordingly, the UNWG is issuing this open call for input.

Questions addressed to all stakeholders are: