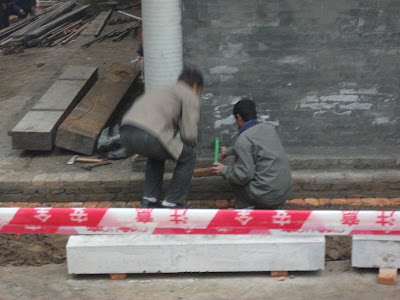 Part XVII—Zhiwei Tong (童之伟) Series:  As long as there is determination, then we can curb the violent demolition and relocation
http://libertyzw.fyfz.cn/art/806865.htm
November 14, 2010

Translator's Note: Chāiqiān (拆迁) has been translated as demolition and relocation.  The connotations itself are actually more complex and involve issues similar to the use of eminent domain in the United States.  In China, chaiqian has been used as a tool of rapid development.  Entire buildings, blocks, neighborhoods and areas are being bought up, the buildings demolished and new buildings built.  The inhabitants are paid a compensation fee (sometimes substantial) to relocate somewhere else.  Oftentimes, the inhabitants are provided with new housing to replace the old housing that was going to be demolished.  The process, unfortunately, is not always peaceful and is also quite frequently corrupt.

Host: “Why has there been one bloody incident after another when it comes to the violent demolition and relocation of homes?  What is the mechanism that is driving local government officials and developers to act so recklessly?  Is it that there are no legal deterrents to prevent them from taking the risks?

Tong Zhiwei: “Businesses and their owners pursue profit, local governments and officials must accrue political achievements, and they both require money.  The owners are looking for money for additional investment, while government and officials are looking for new projects to increase fiscal revenue.  The pressure that they need to withstand is quite strong; therefore they need each other like dry wood and fire.  Once they are combined, they will explode.  Can the process of demolition and relocation be done in a more relaxed fashion?  No!  Businesses and their owners face competitive pressures, local government face performance pressures.  This entire situation involves the political system.  In China, the political future of officials is determined by their superiors.  These superiors use development to measure the performance of these officials.  Of the developmental indictors, the most visible and tangible is GDP.  As a result, they can only direct their efforts to meet this criterion.  They cannot lead the people to live a calm and stable life.  Even if the people are satisfied, they will lose the opportunity for advancement.

In the discussion of the accumulation of capital, Marx quoted an article from Critic Quarterly to describe the nature of capital: “Capital fears where there is no or very little profit, like a natural fear of vacuum.  Once there is a suitable level of profit, then capital will boldly rise.  If there is a 10% profit, then capital will be employed everywhere; 20% profit, capital will be lively; 50% profit, capital will be willing to take risks; 100% profit, capital will dare to trample over all human laws; 300% profits, capital has the courage to commit any crime to the point of risking being hanged.”  The disposition of capital in China is no different.  Local officials, hungry for promotion, recognize the performance requirements for their advancement that is akin to the performance requirements for capital.  Profit-seeking and performance-seeking behaviors are dominated by the same rules.  In China’s political and commerce relationship, government is the dominant aspect.  As a result, the root cause of violence, blood and tears in demolition and relocation of homes lies in the nearly zero roles played by public opinion and voting.”

Tong Zhiwei: “From our current situation, while there are many drivers in violent demolition and relocation, as long as those public power agencies have sufficient determination, the process can fundamentally be curbed.  There are those who are keen to talk about the Chinese model.  In my view, the most prominent feature of the so-called Chinese model is the extensive use of public authority in economic life.  Therefore, violence in demolition and relocation of homes can be seen as a direct result of the excessive use of public power.  Such a problem can only be solved by the entities that are causing this problem.

Public power has several methods in his hands to curb violent demolition and relocation.  Among these, the power to adjust the set of performance evaluation indicators of officials; will be extremely useful.  Of course, from an economic perspective, the appropriate reduction the national pursuit of GDP growth should also be able to create the conditions for the realization of the goal to curb violent demolition and relocation of homes.”

There are examples of cities where demolition and relocation have been done peacefully.  In general, the process in Shanghai has been fairly calm.  In some parts of Shanghai that I’ve gone to take a look, such as Chongming District, the scale of demolition and relocation is great.  Although there seems to be no end to the wrangling, there the situation has not spun out of control and there have been no casualties.  This, of course, has some relationship with the degree of the rule of law that has been developed in Shanghai, but it has more to do with the fact that local government has money and are willing to pay a good price.  The majority of the citizens who live in Chongming seem to be willing to have their homes be demolished and for them to be relocated to the point that some are even offering to do so.  There is a profit in doing this.