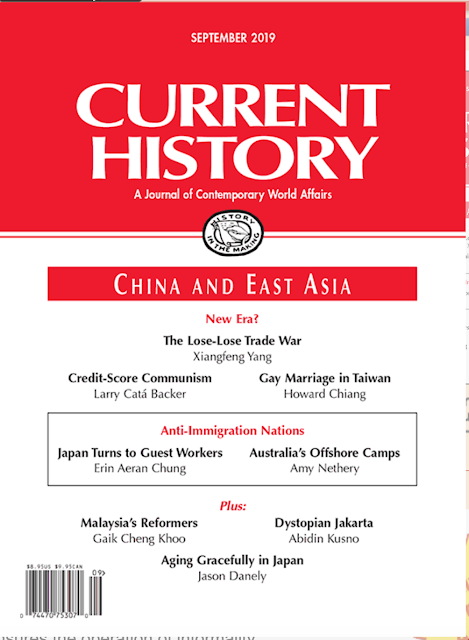 I was delighted to have been asked to contribute to this month's issue of Current History.

Current History enjoys a unique place among America's most distinguished periodicals.The oldest US publication devoted exclusively to world affairs, Current History was founded by The New York Times in 1914 to provide detailed coverage of what was then known as the Great War. As a privately owned publication, Current History has continued a long tradition of groundbreaking coverage, providing a forum for leading scholars and specialists to analyze events and trends in every region of a rapidly changing world. . . Current History publishes nine times per year. Each month's issue focuses on a single region or topic--including annual issues on China and East Asia, Russia and Eurasia, the Middle East, Latin America, South and Southeast Asia, Europe, and Africa. (HERE). 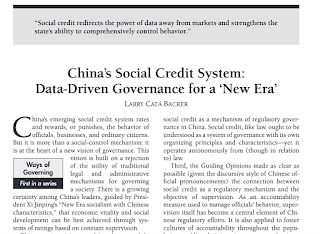 This month issue focuses on China and East Asia. The issue includes fascinating issues on the US-China trade dispute, gay marriage in Taiwan, the character of migration in Japan, and Australia's refugee detention regime,


My contribution, China’s Social Credit System: Data-Driven Governance for a ‘New Era’, is now available free of charge (not sure for how long).  Access to the free version is available HERE. The object was to provide a nontechnical discussion of this new structure of restrictions and privileges designed to nudge people and institutions to approved behaviors. This "social credit" is an experiment that will likely become an ever more important element of Chinese governance and the signature innovation of Chinese “New Era” ideology.

"What all of this means is that social credit, and the accountability culture for which it serves as a proxy, has emerged as a key element in the trans-formation of China’s governance structures. It is integral to the understanding and implementation of a rule-of-law based system compatible with the CCP’s fundamental political line. As such, it represents more than a mere set of “new governance” techniques, or some mad effort to develop an arbitrary Orwellian control apparatus. Rather, it gives form to the long-term and fundamental objectives of the CCP: to detach the organization and operation of politics, economics, and society from their roots in the ideologies and practices of liberal democracy. . .

My thanks to  Current History's editor, Joshua Lustig, for his usual brilliant job or editing and putting is all together.

The links to the articles in the current Volume 118 Issue 809 follow.

The Lose-Lose Trade War
by Xiangfeng Yang
“The feud not only has precipitated an economic decoupling of the United States and China, but also has pushed the overall bilateral relationship to its lowest point in half a century.”
China’s Social Credit System: Data-Driven Governance for a ‘New Era’
by Larry Catá Backer
“Social credit redirects the power of data away from markets and strengthens the state’s ability to comprehensively control behavior.” First in a series on ways of governing.
Japan’s Model of Immigration Without Immigrants
by Erin Aeran Chung
“[T]he government opted for piecemeal solutions that would temporarily meet domestic needs for labor while maintaining official closed-door policies.”
Australia’s Refugee Detention Regime: Offshore and Unaccountable
by Amy Nethery
“[T]he idea that being ‘tough on asylum’ wins elections has become one of the great enduring myths of Australian politics, and apparently both major parties have decided that the stakes are too high to try anything different.”
Are Malaysia’s Reformers Up to the Task?
by Gaik Cheng Khoo
“There is a danger that internal power struggles may cause distractions and derail the project of reformation.”
Escape from Jakarta?
by Abidin Kusno
“The lack of planning can be understood as an art of governing, for it ensures the operation of informality.”
Perspective: Gay Marriage in Taiwan and the Struggle for Recognition
by Howard Chiang
Advances for minority rights in Taiwan may help make the case for independence at a time when China has increased pressure for reunification and faces protests in Hong Kong.
Books: Japanese Ingredients for a Good Old Age
by Jason Danely
Convivial meeting places that cultivate a sense of purpose and belonging are a key to happiness among the rapidly growing cohort of elderly people in Japan.
Four Months in Review: April–July 2019
by the editors of Current History
An international chronology of events from April through July, country by country, day by day.
Map of East and Southeast Asia
by the editors of Current History
Map
Posted by Larry Catá Backer at 8/24/2019 08:50:00 AM