Statement of the Coalition for Peace & Ethics on the U.S. Withdrawal from the Intermediate-Range Nuclear Forces Treaty with Russia 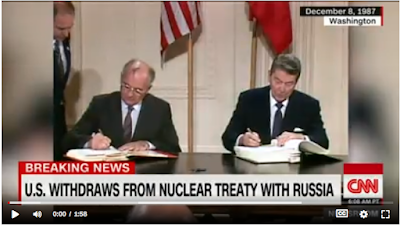 On Friday The United States formally withdrew from the Intermediate-Range Nuclear Forces Treaty with Russia. "The US withdrawal puts an end to a landmark arms control pact that has limited the development of ground-based missiles with a range of 500 to 5,500 kilometers and is sparking fears of a new arms race." (US formally withdraws from nuclear treaty with Russia and prepares to test new missile). Each side blamed the other for actions that made the rupture inevitable. And NATO Leaders were cautiously unhappy.

NATO Secretary General Jens Stoltenberg told CNN's Hala Gorani that the treaty's end is a "serious setback.""The fact that we don't have the INF Treaty anymore, the fact that the Russians over the years have deployed new missiles, which can reach European cities within minutes, which are hard to detect, are mobile and are nuclear capable, and therefore reduce the threshold of any potential use of nuclear weapons in an armed conflict -- of course that's a bad day for all of us who believe in arms control and stability in Europe," Stoltenberg said. "At the same time, NATO is there to protect all our allies and we will take the necessary measures to retain credible defense," he added. (US formally withdraws from nuclear treaty with Russia and prepares to test new missile).

The Coalition for Peace and Ethics issued the following statement in the wake of that news:

1987 was a long time ago. Like China, the United States has entered into a new historical era. That new era touches not just on economic and political development, but also on the important strategic calculations of the United States. It is a pity that rather than renegotiate the treaty to suit the times, both sides chose, for their own purposes, to mutually abandon the treaty and its structure. But the mutual actions of Russia and the United States that produced this situation could not be unexpected, and perhaps in the long run it suits the historical and development contexts in which the decisions were made. As with many of these highly publicized events, it might be more useful to understand the symbolic effect of the action rather than to seek some sort of evidence of substantive effect. Symbolically the act appears to mark a very public break with the now historical structures of the relationship between the United States and the long defunct Soviet Union. Perhaps it is time for a new relationship, not with the ghosts of the Soviet past but with the realities of the Russian present situation. For the European friends of the United States, of course, the symbolic value of the treaty termination is also a reminder that the old assurances of the detente between the United States and the Soviet Union have at last now been swept away, and that, as painful as it might be, that it is time to enter, in a realistic way, a new era of relations with both states with full knowledge of the long term strategic interests of European states. In a spirit of mutual cooperation and with respect for the sovereignty and national interests of all parties, it is likely that a new win-win arrangement may be possible. All states may have an interest in helping the parties to reach that goal consistent with the present realities.