It has taken some time for the great and sometimes unlubricated wheels of the United Nations Geneva apparatus to move in the direction of the situation in Hong Kong. That eventually some movement would occur was both inevitable and now unavoidable. But such a movement puts the UN Office of the High Commissioner in a delicate situation. 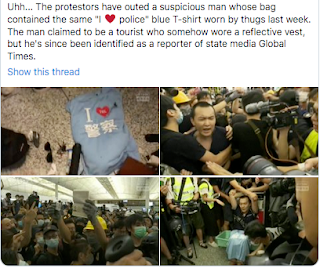 The Cheese side would likely view any recognition of "trouble" in the SAR as both "sensitive" and as interference in the internal affairs of China. China, as a big power country would tend to take umbrage--though it should be noted that such umbrage appears much less in evidence when the interference is pointed elsewhere. On the other hand, many of the High Commissioner's other stakeholders have become increasingly vocal about the situation in Hong Kong and critical of the way it has been handled--using in many instances the language of international human rights. These state and non-state actors also cannot be ignored.

In contrast to the likely Chinese position on the "correct" statement from the OHCHR, these stakeholders would likely reject as "incorrect" any recognition of the trouble in Hong Kong that did not stress violations of human rights and did not include warnings against overt changes to the status of Hong Kong. Failure to include both might be read as an unacceptable retreat from the broad principles of global human rights they have worked hard to embed--though it should be noted that this embedding appears to apply differently in a number of contexts. 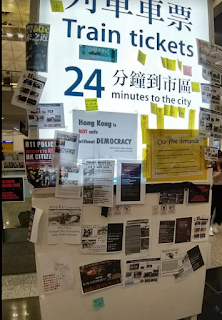 In this context, then, it is clear that China likely would expect an expression of support for its restraint, a warning against foreign interference in its internal political order, and an acknowledgement of its right to act to protect what it views as the integrity of its system. Likewise, in that context it is clear that other state and non-state actors (mostly from the Western camp) would expect an expression of support for the protestors, of disapproval of the overreaction of police personnel and others, and an acknowledgement of the right of individuals to act to preserve the integrity of the global human rights system and its principles.

Given these constraints, it appears that the OHCHR has tried to give all parties what they desire--a statement that folds in on itself and sums to zero. It was well done and elegantly expressed, but will it be read in the spirit in which it was delivered?  Note the key words inserted at just the right time in support of both positions. It is easy, though to read into the words an unbalanced support for either side--depending on how the reader chooses to interpret the carefully worded text. It is now for the parties to sort through the contradictions, recast the statement in the best light possible for the furtherance of their respective goals, and perhaps respond in some way to the OHCHR itself in some to be determined way.

The Press Briefing follows below in English and with 粗汉语翻译

The High Commissioner is concerned by the ongoing events in the Hong Kong Special Administrative Region (Hong Kong SAR) and the escalation of violence that has taken place in recent days.


The High Commissioner condemns any form of violence or destruction of property and urges everyone participating in the demonstrations to express their views in a peaceful way. She notes the Chief Executive’s commitment to “engage as widely as possible” and to “listen to the grievances of the people of Hong Kong.” She calls on the authorities and the people of Hong Kong to engage in an open and inclusive dialogue aimed at resolving all issues peacefully. This is the only sure way to achieve long-term political stability and public security by creating channels for people to participate in public affairs and decisions affecting their lives.


The rights of freedom of expression and peaceful assembly and the right to participate in public affairs are expressly recognized in the Universal Declaration of Human Rights, as well as the International Covenant on Civil and Political Rights which is incorporated in the Basic Law of the Hong Kong SAR.

The UN Human Rights Office has reviewed credible evidence of law enforcement officials employing less-lethal weapons in ways that are prohibited by international norms and standards. For example, officials can be seen firing tear gas canisters into crowded, enclosed areas and directly at individual protesters on multiple occasions, creating a considerable risk of death or serious injury. The Office would urge the Hong Kong SAR authorities to investigate these incidents immediately, to ensure security personnel comply with the rules of engagement, and where necessary, amend the rules of engagement for law enforcement officials in response to protests where these may not conform with international standards.

The Office urges the Hong Kong SAR authorities to act with restraint, to ensure that the right of those who are expressing their views peacefully are respected and protected, while ensuring that the response by law enforcement officials to any violence that may take place is proportionate and in conformity with international standards on the use of force, including the principles of necessity and proportionality.