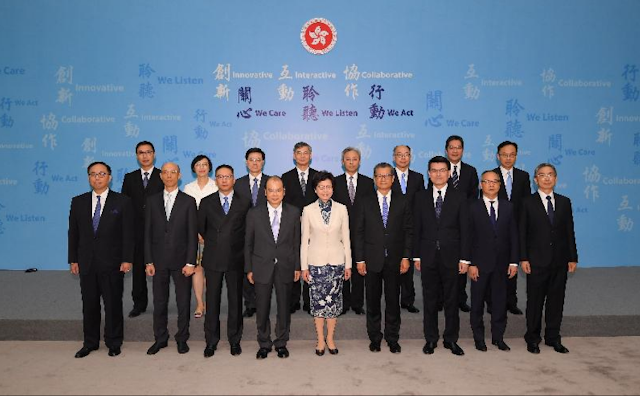 The political situation in Hong Kong has remained fluid since the protests erupted in early June over the SAR government's handling of a proposed Fugitive Offenders Ordinance.  That the Extradition Law was so clumsily put forward was a pity, and an indication that even from the perspective of Chinese Marxist-Leninism, that the SAR government has failed fundamentally to practice the Mass Line, even within the quite sui generis context of SAR governance. 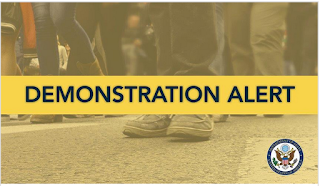 Recent actions on all sides continues to inflame  a situation that remains dynamic. Ultimately social peace and good government must be restored, sensitive to the special conditions of Hong Kong as well as of the fundamental relationship between the Hong Kong SAR and the Central government. Decision making will have to take into account not just the situation within the Hing Kong SAR, but, because the People's Republic of China is now an international global role model, the effects of the actions of governmental authorities on the standing and reputation of China in the world. That may require the avoidance of provocative statements (e.g., here, here, and here). 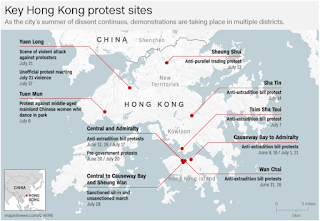 The central authorities issues a statement at the end of July (The Chinese Position on the Situation in Hong Kong: Chinese and English Language Versions of Statement on the State Council Information Office Published: 2019-07-29 [国务院港澳办新闻发言人介绍对香港当前局势的立场和看法 ]). But the situation continues to develop (see here, here, and here).  And additional parties have sought some level of intervention, both within and outside of the SAR, while some elements of the security forces are allowing themselves to fall into the trap of labeling all foreigners as "agents" recalling a time in Chinese history repudiated by the CCP leadership core (here, here, here). 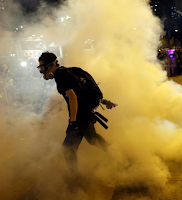 "A general strike aimed at bringing the city to a halt is planned for Monday. Many flight departures were shown as being cancelled on Monday and a source and media reports said this was due to aviation workers planning to strike.Late on Sunday, hundreds of masked protesters blocked major roads, spray painted traffic lights, started fires and prevented transport from entering the Cross-Harbour Tunnel linking Hong Kong island and the Kowloon peninsula." (Hong Kong government: protests are pushing city to 'extremely dangerous edge')

As the authorities contemplate their future responses, they have been kind enough to issue a new series of statements that ought to be taken seriously.  These statements are reproduced below in English  (with thanks to Flora Sapio for translations) and 以及原始的中文版本.

Cross-posting from Sanshui, Samizu, Samseol (these include additional short reflections).


On [August] 3 while some persons held a march in Yau Tsim Mong District, Hong Kong some extremists kept conducts such as destroying the national flag and attacking the police station. In the early morning of [August] 4, strong condemnation was expressed by a spokesperson of the Hong Kong SAR government. Violence was also sternly condemned by the Hong Kong Police. The Police announced that more than 20 people were arrested during the operations held to disperse the demonstrators.
A spokesperson of the SAR government stated that during the demonstrations, some of extremist demonstrators had violently attacked the police station, destroying vehicles, and committing arson in several places. At the same time, it is suspected that demonstrators deliberately destroyed the national flag, violating the National Flag and National Emblem Ordinance of the Hong Kong Special Administrative Region. The government strongly condemned extremist demonstrators’ disregard for law and discipline [目无法纪], deliberate undermining of social peace to the point of challenging national sovereignty. The police will strictly enforce the law, and unlawful demonstrators who commit violence will also be subject to legal sanctions.

The Hong Kong Police said that they severely condemn the violence of extremist demonstrators and stressed that law will be strictly enforced [to punish] all illegal and violent acts. The police have the ability and determination to maintain social peace and do not tolerate any violence.

The Hong Kong Police said that from the evening of the [August] 3 to the early morning of [August] 4, demonstrators blocked the traffic lanes on both sides of the toll plaza of the Hung Hom Cross Harbour Tunnel using fences and various objects. As a result, the two sides of the tunnel were closed and the traffic was seriously obstructed. Some extremist demonstrators blockaded the Tsim Sha Tsui Police Station. The facilities outside the police station were destroyed and arson was committed in several places. Some extremists demonstrators surrounded the Wong Tai Sin Disciplined Services Quarters throwing firecrackers and a large amount of objects into the dormitory, which seriously threatened the residents' personal safety.
The Hong Kong Police said that during the operation [held] to disperse the demonstrators, more than 20 demonstrators were arrested such conduct as for illegal assembly and attacks.