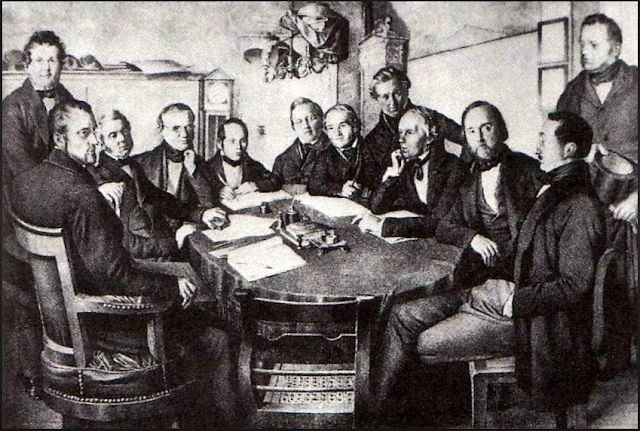 The issue of gender equity on corporate boards has been the object of much attention in recent years (e.g., here; here and here). It has also been the subject of some legal reform efforts. Much of this has occurred in Europe (e.g., here (Norway)). 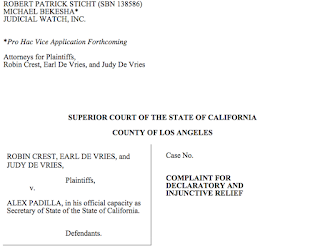 Now that effort at legislative reform has been challenged.  On 6 August a lawsuit was commenced in Los Angeles County Superior Court challenging SB 826 ( Robin Crest, et al. v. Alex Padilla (LASC Case No. 19STCV27561)). It was brought by Judicial Watch on behalf of three taxpayers.
An e-Bulletin was prepared by William Ross of counsel to Hirschfeld Kraemer LLP and Katherine Blair a partner at Manatt, Phelps, Phillips LLP. It was distributed to the members of the California Lawyers Association Corporations Committee on 14 August  and follows below along with a copy of the Complaint, which may also be accessed HERE.

August 14, 2019
On August 6, 2019, a lawsuit was brought in Superior Court in Los Angeles County seeking (i) a judgment declaring expenditures of taxpayer funds and taxpayer-financed resources to implement SB 826 to be illegal, and (ii) an injunction to halt California’s Secretary of State (Alex Padilla) from expending taxpayer funds and taxpayer-financed resources to implement that law. SB 826 is a California law that went into effect on January 1, 2019 requiring publicly-held corporations--those with outstanding shares listed on a major United States stock exchange--that are incorporated in California or that have their principal executive offices here, to have at least one female director on their board by December 31, 2019. No later than December 31, 2021, such corporations must have at least one female director if their number of directors is four or fewer, at least two female directors if their number of directors is five, and at least three female directors if their number of directors is six or more.
The new law requires the Secretary of State to publish an initial report no later than July 1, 2019 (which it has done here), and thereafter to publish annual reports documenting the number of corporations whose principal executive offices are located in California and who have at least one female director. Starting January 1, 2019, publicly traded corporations and publicly traded foreign corporations (defined in Sections 1502.1 & 2117.1, respectively, of the California Corporations Code) have been required to disclose on the Corporate Disclosure Statement (Form SI-PT) filed with the Secretary of State whether the corporation’s Form 10-K lists a California principal executive address, and, if so, whether it has at least one female director on its current board of directors.
The failure to timely file board member information with the Secretary of State will result in a fine of $100,000. In addition, a first violation in failing to meet the quotas established by SB 826 will result in a fine of $100,000; each violation thereafter will result in a fine of $300,000.
The lawsuit, Robin Crest, et al. v. Alex Padilla (LASC Case No. 19STCV27561), notes that the State Assembly Appropriations Committee indicated that there will be ongoing annual General Fund costs of approximately $500,000 for the Secretary of State to adopt regulations, investigate claims and enforce violations of the law’s provisions. The plaintiffs allege that the expenditure of taxpayer funds or taxpayer-financed resources on the statute violates the California Constitution, in that SB 826 is a quota system for female representation that uses express gender classifications, and is thus immediately suspect, presumptively invalid and triggers strict scrutiny judicial review, which, the plaintiffs assert, the legislation won’t survive because the Secretary of State can’t make the difficult showings that it is justified by a compelling governmental interest and has been narrowly tailored to serve that interest.
The lawsuit was brought on behalf of three California taxpayers by Judicial Watch, Inc., a conservative foundation that also recently filed a lawsuit to block implementation of California’s new law requiring presidential candidates to file certain of their income tax returns with the Secretary of State in order to be allowed to appear on California’s presidential primary ballot.
When he signed SB 826 last year, Governor Brown noted that there have been “numerous objections to this bill and serious legal concerns that have been raised” and indicated that he didn’t “minimize the potential flaws that indeed may prove fatal to its ultimate implementation.” Aside from the claims raised in the current lawsuit, it may also face legal challenge that it violates the internal affairs doctrine arising from the U.S. Commerce Clause.
This e-Bulletin was prepared by William Ross, of counsel to Hirschfeld Kraemer LLP, and Katherine J. Blair, a partner at Manatt, Phelps, & Phillips, LLP. Mr. Ross and Ms. Blair are members of the Corporations Committee of the Business Law Section of the California Lawyers Association. 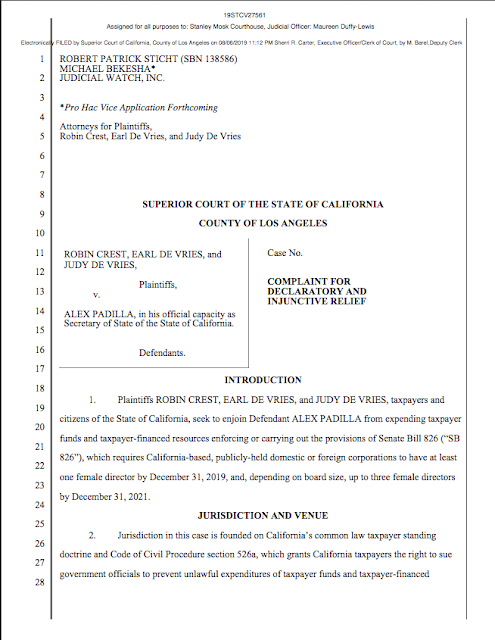 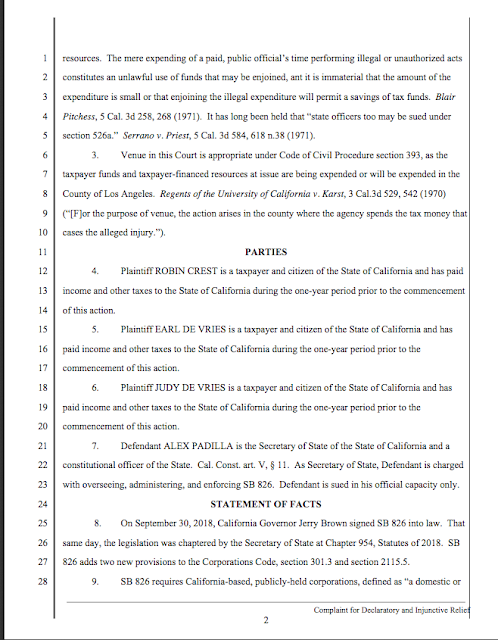 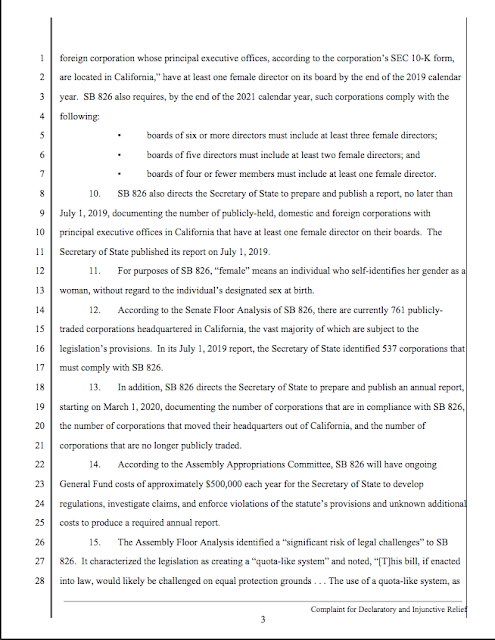 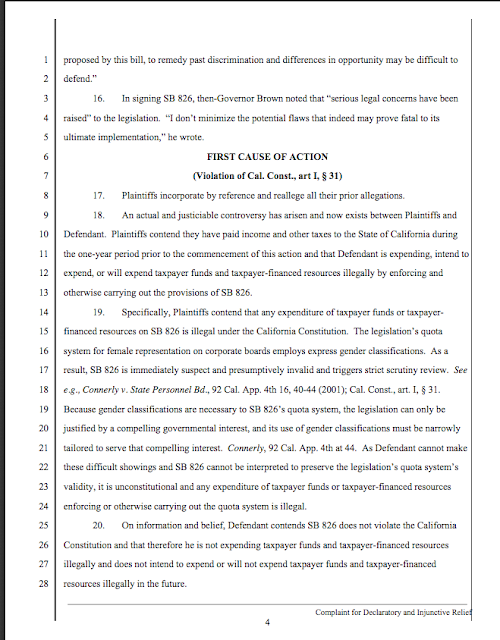 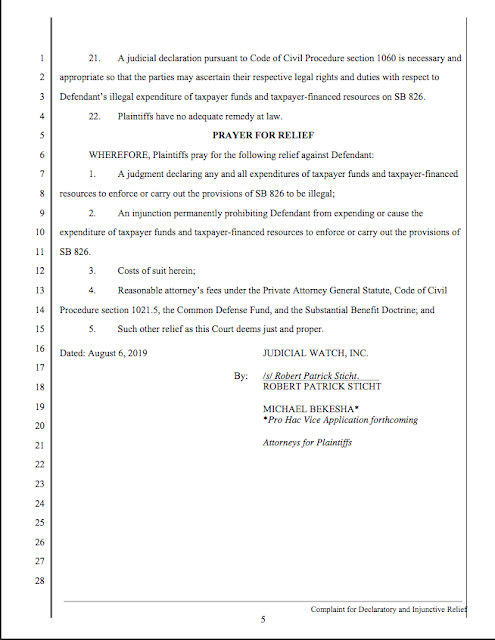